Copy some of Leonardo Da Vinci's inventions in our home workshops, even today and with our tools Modern, it would take us a long time and many headaches. But one of his projects, the self-supporting log bridge, does seem like a project within our reach. At least on a reduced scale. So in this post we are going to see how to make the Leonardo Da Vinci bridge. Whether it is his invention, or if it is from the Chinese, we will leave it for other discussions.

The first thing to do is select the posts to make the self-supporting bridge. I decided to use treated wood posts, as this Leonardo Da Vinci's wooden bridge sure will end up as a garden ornament. 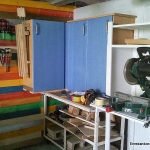 I paint my workshop and the woodworking diy combination machine

Basically, it is about selecting the posts, of treated wood, that are more straight and with less cracks. And once I have selected them I can cut them to the desired lengths. In my case, the treated wood posts are 58mm in diameter. And I cut 5 pieces 91cm long (the horizontal short pieces), and another 10 pieces 109cm long. Well, I actually cut them a little longer. Those were the final lengths after the retouches that we can see in the video.

I only have to sand the short pieces, but I have to cut three notches for the long pieces. A notch at each end and a central one at 180 degrees with the first ones. Something not very complicated to do with a guide for the column drill and a crown bit with the diameter of the posts (or slightly less). Or rather with two guides.

The first drill press jig that I have to make is a simple board with a batten screwed on it. The function of the batten is to work as a stop block for the posts so that the depth of the notches is always the same.

So I just have to measure how far from the end I want to drill the notch. And I drill a notch into one end of all the long logs. Only at one end.

And now, to drill the other two notches in the logs, to make the Leonardo Da Vinci's bridge, I have to modify the drill press jig by putting vertically a piece of post.

Thus, this piece of post allows to fit the notches already made and serves as stop for drilling the other notches always at the same distance. In the video you can see, step by step, how to make this guide for the drill press.

Protect the wood of the posts from weather and insects

Now, before assembling the self-supporting bridge, I sand all the wood logs and I treat them with a protective stain. I know the posts are made of treated wood, but extra protection won't hurt them. And also, being stained, they will be more beautiful than with the characteristic dirty green look that treated wood usually has.

How to assemble the Leonardo da Vinci's self-supporting bridge

And once the wood protector is dry I can assemble the Leonardo Da Vinci's bridge. At first glance this logs bridge looks like a complicated framework, but as soon as we fit the first notches we can see how this bridge made with logs works.

In the video you will see that this wooden bridge is quite easy to assemble. Another thing would be to build a bridge with much larger trunks to cross, for example, a small river. I suppose that Leonardo Da Vinci's inventions would bring instructions for use and assembly :).

See also in the following video how I did to propose the measures to make this self-supporting bridge. It includes how to select the posts of treated wood, to make this bridge that happens to be one of the best-known inventions of Leonardo Da Vinci.

Although I would say that the Chinese had known him a long time before. You can also find, in this carpentry and DIY blog, how to make a guardian fence with posts, including a trick to drill the posts into the drill press.

Precise cuts in wood with the jigsaw table

How to install a workbench vise

Woodworking trick for clean cuts with the jigsaw

How to make a box of wooden strips