When I made this height adjustable wooden fence for dog jumps I wanted to over adjust the dimensions of the slot where the tongue and groove boards come in and the length of those boards. The result was that when I wanted to mount the fence, once it was finished and with the dry protective tint, the boards were very difficult to fit, leaving them halfway into the grooves.

Aside from applying two coats of stain it involves eight coats of stain narrowing the groove (two on each inside face of the slats and another two on each side of each board), I noticed that the top of one of the slats seems to slant towards the interior (it is part of the problem of buying wood that has been standing for a time in a DIY center, it always comes somewhat twisted and that makes it difficult to work with it).

So using a straight bur I tweaked the inside of that ribbon. The only problem was that the lateral guide of the milling machine I had to put it on the small flange that was between the other strip and the post, so that the base of the milling machine was elevated, but with a piece of marquetry under the base. I practically saved that height difference. 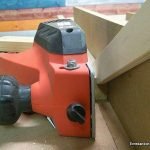 How to adjust my homemade thickness planer

Once the milling was done, I only had a thin strip of slat in the bottom of the groove, but I cleaned it easily with the chisel.

I also cut the boards only two or three millimeters shorter than the length of the wooden beam that joins the lateral supports at the bottom of the fence, so when I put them in the grooves as soon as I tilted them a little they would fit on the sides and did not go down to their position. But with the template for 90 degree cuts With the disc saw it is very easy to cut a few millimeters at one end of the boards. Just removing a slice of wood equal to the thickness of the saw blade plus the thickness of those remains you see in the photo was enough. I sanded the cuts a bit, applied the two layers of dye on them, and the fence was done.

How to make a wooden fence height adjustable:

I use the drill press to make dowel joints

How to install the cabinet crown moulding

I use the wooden hoop to make a choker