And I was already playing the part I least like, painting. And with the painted parts I was able to glue the parts, drill the holes for the screws, install the electrical part and finally assemble and turn on the lamp.

Before painting the LED lamp (<-You can find there how to make the lamp step by step) I have to sand all the wooden parts well with a fine sandpaper, without forgetting any corner. With an even finer sandpaper block I gave a final sanding and cleaned the dust from all the pieces well. I put some small headless nails in several wooden dowels and put on them the wooden surfaces that did not need to be painted. So with the raised pieces I can paint the lamp and varnish without fear that the paint will stick to the newspaper that I put underneath to protect the work table.

Normally I would give a coat of primer, but I don't have a suitable one for the synthetic paint I have (an old pot of green paint that I had at the bottom of a workshop closet), so I gave a coat of paint, stretching it out well, and when It was dry I sanded gently with the fine sandpaper pad. I went through all the paint with my fingers to make sure I had no rough parts without sanding, wiped off the dust and gave a second coat. And with the tint varnish the procedure was the same. If the paint and varnish are stretched well and the hands are lightly sanded, the difference in color and feel between the first and second coat is enormous. 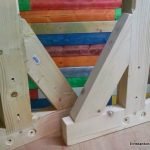 Making the side supports for the adjustable wooden fence

With the paint already dry I put each half of the lampshade in its corresponding half of the tree, sticking a couple of staples at the base of each screen to make sure they would not be raised above the trunk. And in order to easily seal the gap through which the led bulb passes with a few layers of toilet paper stuck with the glue and water mixture. If that hole is not sealed, we will have a brighter light that comes out of it and will make the lamp ugly.

To glue both halves I apply a thin bead of carpenter's glue to the edge of the unpainted wood, and also to the edge of both screens. With a small brush I stretch the glue well, cleaning the excess with a piece of paper. I put one half on top of the other and squeeze them with the cheap carpenter sergeants, taking care to align both pieces well and trying to protect the paint with a few pieces of felt.

The lamp holder is screwed into a piece of hollow threaded rod, which in turn is screwed into the hole made for this purpose at the base of the lamp. Now I just had to put the cable through the side hole, lead it into the socket and make the electrical connections.

And by the way I put some pieces of self-adhesive felt, the same ones that I had used to try to protect the paint when I used the sergeants (and I confess that they left a very slight roughness in the paint, although without the felt the damage would surely have been a lot higher).

And finally, a note of security: I use a led bulb with only 1 watt of power. I checked that nothing gets hot after a long time on. An incandescent light bulb or even those with low consumption, whatever their power, generate heat, which means that being in this lamp so close to the screen paper, it could burn and even burn.

How to make small wooden wheels

Christmas tree lamp part 3: the base for the shot glasses

Sharpening chisels with a sharpening jig