To make a somewhat complicated molding on a table, like the one in the photo, we have basically the same problems as when making plywood gears like the ones we saw in a previous post: we need the most perfect drawing possible in the way that we want to achieve; and we need some way to make the cuts with enough precision.

This project came to me a little bounce, as I was planning to do a wall mount for thermometer And in the end I decided to focus on making a more complicated molding on a wooden board. And I have to say that it was a surprise to see the success of the video on my YouTube channel.

Despite using a metal sheet as a guide wall thermometer I was thinking of screwing on this board, making a symmetrical drawing and repeating it the same on the other side of the board was somewhat complicated. 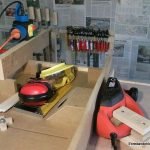 How to make a thickness planer

In the video I explain in detail how I made the drawing once I decided on the model shown in the photo.

To cut with enough precision a band saw would be perfect, but in my case I settle for my table jigsaw homemade. I just have to plan the cuts a little, without trying to force when making the curved cuts. First I make straight cuts to remove most of the wood. I continue with the upper curve, which I can do by cutting half to one side and the other half to the other side.

And then I cut the curved corners without much problem (something that would be a little more complicated with the Jig Saw hand). So I only have the small interior curves, which I planned to make by drilling with a drill with a radius equal to the radius of the curve. But since I was not sure if I could drill in the exact place in all four cases, and any deviation would be too noticeable since the molding was no longer perfectly symmetrical, I decided to approach the curves with cuts perpendicular to the line, taking great care not to exceed the line.

A little work with the coarse file making sure to keep the cuts vertical with respect to the table surface, and going over the marks with the medium grit sandpaper,

and I can now attach the table to the work table to mill the trim with the router.

How to make small wooden wheels

Problems with blade alignment and cuts at 45 degrees

How to make a wooden lamp out of hangers