When we make one table or work bench For our "DIY" carpentry workshop we want it to be very firm, and no matter how good and rigid the wood joints are, so that the bench does not move from one side to the other, it must be somewhat heavy. The result is a table that, "as we wished", is not easy to move.

In a small DIY and carpentry workshop, tucked into a garage, if you have everything neatly arranged to optimize space you probably only need to move tables and workbenches occasionally.

But it is not exactly my case, since I am constantly moving them so as not to have an ugly wall behind when I record the videos. 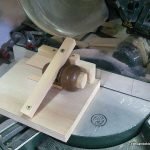 When I had only the multifunction table, I just rotated it according to whether I was going to use the milling table, the thicknessing brush or the table saw. Now that I no longer have to use it for other tasks other than the ones mentioned, but I have a new work table for it, I am sure that both will move around the workshop a lot (to have behind the beautiful colored tongue and groove wall when I do the videos), so I decided to put some wheels on them.

Working on a bench that is on wheels does not seem to me the best option, since although these can be blocked the table will always have a little dance. The solution is to put wheels that can be folded.

The easiest thing would be to put the wheels on wooden blocks with hinges that allow them to be put completely under each leg, but this would mean raising the table too much to put them under and that would support the weight of the table, and it does not seem comfortable to me to have have to lift the table so much. On the other hand, I do not want the wheels to be very exposed when they are folded, but I prefer that they are towards the interior of the table to avoid hitting them or stepping on them.

In the video you can see the system that I finally used. It is a bit sloppy but I think it will be very useful for a long time. To keep the wheels a bit tucked into the table when they fold, I put them on pieces of wood that go between the legs on the short sides of the table.

And so as not to have to raise the table too much to fold and unfold the wheels, with some screws and closed spikes I was able to make a kind of hinge that works as a turning axis and that I can put slightly raised above the ground. Thus the legs only rise a couple of centimeters above the ground when the wheels bear the weight.

I still had a problem: the wheels sometimes folded on their own and I was in danger of being hit hard by the piece of wood on my toes. The solution to prevent them from folding on their own was to put those straight spikes that grip against the legs and prevent twisting. I just have to remember to turn those spikes when I "unfold" the wheels.

But it may be that on some occasion I forget, with the danger that this would have for my feet (it is very easy to put my feet under the table), so I placed that rod in front of which I tripped before putting my feet in danger . I only had to put the pieces of plywood as spacers so that the rod did not hinder the rotation of the rollers.

Surely with the use and the kicks the rod ends crooked, but I only need to remove and put two screws to replace each of them. And if you are wondering why in green, it is because it is a green plastic lined tutor for tomato plants.

How to make a wooden hoop

A simple base for my DIY jigsaw table