When I mounted the bearing mount to keep the cutting blade vertical on my home table jigsaw, I didn't worry about having no space behind the blade to make straight cuts with the jigsaw. Anyway, I did not plan to make those types of rip cuts with this saw. But as many of you ask me how to cut straight with the tabletop jigsaw, I wanted to try putting the blade holder sideways.

One of the advantages of the bearing bracket I use is that it is very easy to remove and attach. So I unscrewed it, presented it sideways glued to the back of the blade, and marked on the board the position I wanted to put it in.

I put the base of the bracket as far away from the cutting blade as I could, so that it had room on the side to screw in the little bearings. And if you look at the photo, the gap between the stand base and the cutting blade is the maximum width that I will be able to cut. And although it does not seem very certain that it is sufficient for most cuts. 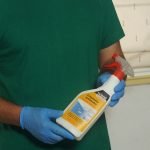 How to remove moisture stains from the wall

On top of the wooden block I screwed a piece of plywood to have a platform with the surface level with the table top on which to put the support with the bearings.

And since I didn't find the other matching bearings, which I know I have somewhere in my messy carpentry shop, I unscrewed the bearings from the front of the bracket. I measured the clearance I need between the bearings, drilled a couple of pilot holes, and screwed the bearings into the side of the housing in a suitable position so they can guide the jig saw blade smoothly. Although as you can see in the video, I had to remove one of the bearings and relocate it, since it had left them too close together and they did not leave enough space for the thickness of the cutting blade of the jigsaw.

and screwed the bracket to the base that I made next to the board.

And with a slat fastened with sergeants, as a lateral guide, I was able to try making straight cuts with the jigsaw. Straight cuts in plywood are easy to make.

But cutting straight across, to the thread, in solid wood like pine, is another matter. Making these cuts straight is difficult for this jigsaw. And the cutting surface, although straight, is horrible. Some of you tell me that perhaps, to cut straight with the jigsaw and in line, I should find a suitable blade for these cuts, so I will have to look.

Don't miss how to do this table jigsaw.

How to make a spinning top

Mortising on the drill press without attachment