How to remove the electric toothbrush blades

The first thing I have to do is remove the blades from the blade holders, for which I have to loosen them.

With a wrench, turn the hexagonal screws in the direction of threading them. In this way the head of the screws stops pressing against the walls of the brush drum and the knife holder is loose. Although I still won't be able to remove it from the drum. But now I can remove the blade. 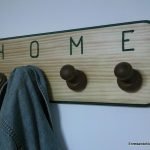 I use curtain wooden pole ends to make a clothes hanger

I tip one end of the knife holder upward while pushing the knife on the other end. And when I can, I pull the blade with my fingers to get it out all the way.

Once I removed the two blades, I could insert the new ones and adjust them, but I will take the opportunity to clean the drum and the blade holders a little. So, I have to finish fully tightening the hex head bolts, and I also need to unscrew the two Allen screws I have, one on each end of the knife holders.

So I can raise the blade holder at one end and remove it at an angle on that side of the drum. If we try to remove it directly upwards, it does not come out, since the opening of the drum is narrower in the upper area.

If you don't unscrew the Allen screws enough, they trip when you try to remove it from the side. Those screws will help me later regulate the position of the blades.

Now I can clean the brush drum and knife holders with a soft wire brush and the vacuum cleaner. And I also take the opportunity to put a little three in one on the knife holders and their screws.

How to put the new blades into the brush

To insert the new blades, I just have to make sure that the small slot in the blades coincides with a small protrusion in the blade holders.

I match them both at one end and slide the blade all the way into the blade holder.

If in any case the blade resists a little bit, I can carefully separate both pieces of the blade holder with my fingers. If I make too much force both parts can be separated, but it is easy to fit them back together.

Once I have the blades inside the blade holders, I place these on the brush drum. And just as I did to remove them, I have to put them slightly inclined on one side of the drum with the fully threaded hex screws and the allen unscrewed, so that nothing trips.

How to adjust the electric toothbrush blades

The normal thing is that at this point I find that the edge of the blades is very far from the level that marks the fixed base of the electric carpenter's brush.

But I can tighten the allen screws to raise the edge of the blades until they are perfectly level with the fixed base of the electric brush. Once they are in the position I want, I turn the hex screws in the direction of unscrewing them to tighten the blade holders firmly against the drum.

I check that the blades are still in position, level with the fixed base of the brush, I take the opportunity to clean and polish both bases of the electric brush with a very fine sandpaper so that it slides better, ...

and test how it works with the new and well adjusted blades. Now it does not leave the marks left by the nicked blades, and being level I do not have the typical rebates at the beginning and at the end of brushing.

How to make a circular saw cross cut jig

How to make a simple window frame