But as I have just mentioned, once I had the drill press table installed I was amazed with how much easier it makes drilling. A larger table provides much better support for the workpieces to be drilled, and a lateral fence, that pivots in one end, makes it easy to adjust the exact position in which I have to drill.

To make this drill press table, I will use a piece of plywood board that is just a little more than 15mm thick. And I will cut it with the jigsaw (1). 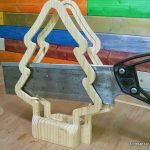 I cut the tree shape in two equal halves

Now with the square I have to draw a perpendicular line (3) from the straightest edge of the board starting at the mark I made, and I am going to put a small wooden strip glued to the line (4) so ​​that the strip is in what would be the outside of the metal table. After drilling a pilot hole (5), I insert a screw (6). With the square I make sure that the strip is perfectly at 90 degrees with the edge of the board (7), and I put in a couple more screws (8).

And I hold the plywood table with a sergeant. I also need to put another strip underneath the board. So, I'm going to press it well against the other side of the metal table, and I hold it with another sergeant (10). I mark where to put the first screw (11), I drill a pilot hole (12) and I can now screw the first screw (13). And in the same way I put a couple more screws.

In order to use the plywood table in the drill press, I need to fasten the plywood table to the metallic table. So I will use bolts and wingnuts so that it will be easy to put on and take off the drill press table. Also, I don't want this drill press table to be fixed, but I want it to be able to be easily moved back and forth. For this I will take advantage of the grooves in the metallic table (14).

I could leave the drill press table like this, but when drilling it will spoil the surface little by little. That is why I will place a thin plywood plate that can be easily changed when it is badly damaged. For this I draw two parallel lines centered on the plywood table (19). I install a straight router bit in the plunge router, and I put the router on the plywood table so that the two edges of the router bit are at 90 degrees to one of the lines, while one of the edges of the router bit is right on the line (20 ).

If you pay attention, notice that I put the clamps so that, in addition to holding these strips, they also clamp the drill press plywood table to my work table.

That way I am sure that anything will move, and I can route a recess with a depth equal to the thickness of the thin plywood plate that I will use (25).

With the jigsaw I have to cut the piece of marquetry a few millimeters larger than necessary (26). And now I can sand the edges until the veneer fits perfectly into the recess that I milled (27).

I can now put the table in the drill press. I insert the bolts (28) and insert from the bottom of the table a pair of washers and a wing nut on each bolt (29).

I put on the plywood table the strip that will work as a fence and also will help as a lateral support for drilling, and I fasten it in one end, from the bottom of the table (30), with a single screw (31). Thus this strip fence pivots on the table, which makes it very easy to adjust the position of the workpiece that needs to be drilled.

And when necessary I can hold the other end of the guide with a sergeant (32). In this way I already have my table for column drill ready.

So by putting my workpiece on the table of the column drill and against the batten, and moving the part along the batten, and / or pivoting it together with the batten, I can accurately drill at any point (33) resulting very easy to go from one point you need to drill to the next.

As you can see, a drill press table is a very easy project to do. And it will be very useful in many of our woodworking projects.

How to make a small wall display cabinet

How to make a wooden hand mirror