The Americans and the English call them finger joints, and in Spanish they seem to be called ties. But to me those ties always sounded like dovetails, so I usually called them finger-type unions, so that it would be understood what type of unions she was talking about. But recently they gave me a (deserved) little bit, explaining that they are called straight ties. The truth is that I saw these unions with different names that are more or less similar, but definitely the names that I like the most and that make it clear what type of unions we are talking about, or "straight ties" or "straight teeth". And that is what we are going to see in this post, how to cut a union of straight ties. Or at least how I cut them.

To cut a joint of straight ties on two boards with the same width and the same thickness, I start by marking the thickness of one of the boards at the end of the other board, and on both sides (1). Now I have to mark the dimensions of the teeth on line (2), distributing the teeth so that they are symmetrical with respect to the center of the line. With the help of the square, trace the perpendicular to the head (3).

And I continue the line on the head perpendicular to the corner (4), and I draw the lines perpendicular to the corner on the other face (5). Just to avoid mistakes when cutting this union of straight ties, I have to mark which are the teeth that I want to keep and which are the gaps that I want to cut (6). And all this with the best sharpened pencil that I can. 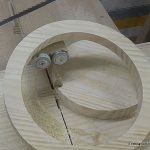 How to make a wooden hoop

Now, with the nail on the line, I place the saw glued to the nail, thus leaving the saw just to the right of the line and in the hole I want to cut (7). And I am going to cut with the saw tilted almost until I reach the horizontal line that marks the height of the teeth (8). Then I cut the other end of the hole leaving the saw to the left of the line, making both cuts on this side of the board for all holes. And I turn the table on the homemade bench gag (9). With the table turned, I cut again on the same cuts I already made, but this time with the saw horizontally, making sure that I don't get to cut the horizontal line that marks the height of the teeth (10). Now with a marquetry saw I cut a few millimeters above the horizontal line, thus removing most of the wood from the holes I want to leave (11 and 12).

To finish with this table, all I have to do is clean the gaps between my teeth. I lay the board flat on my workbench and with a chisel I start marking on one side of the board on the line I have at the base of the holes.

And now with the flat face of the chisel towards the table, and with this perfectly vertical, I am going to nail the chisel to half or something more than the thickness of the table. I start at one end and advance over the line overlapping a cut with the previous one. With the well sharpened chisel and the help of the wooden hammer, the chisel enters the wood without major problem.

I rotate the board and mark the line between the gaps on the other side. This time when driving the chisel again I reach the cut I had made from the other side. This way I manage to eliminate the excess wood that I had left at the base of the hole. Due to a lack of expertise and perhaps because the wood is very dry or not the most suitable wood to cut these straight loops, sometimes holes caused by the wood when they break remain in the center of the base, but it is not something that I worry too much, since it is something that will be hidden when making the union with the other table.

To finish cleaning the holes, with the smooth part of the chisel always resting on the base of the holes, I carefully turn the edge to the sides and move forward, gradually cutting the protruding wood.

And on the sides of the hole, with the flat part of the chisel against the corresponding tooth, and the chisel perfectly vertical, I am going to touch up the cut to make it clean and as vertical as possible.

I can already use the cut teeth and holes in this table to draw the holes and teeth in the other table with which I want to make the union of straight ties. But that will be in the next entry. Or else in the following video I show the complete process by which I made this wooden joint.

Straight and rip cuts in wood with the jigsaw table

How to make tongue and groove joints