When my parents had the rural house here in Galicia, I had to spend a couple of summers attending to the visitors we had, who were mainly from other communities in Spain.aqui And as many know our customs, there was always someone who asked if we knew how to make queimada, so I also had to buy the typical clay pot.

I really started making queimadas during the year I lived in Castellón de la plana, and in the rural house I improved my technique enough to be happy with the “concoction” I get, but lately that baked clay pot sees little aguardiente. Although maybe someday I’ll dust it off to show you how to make a Galician queimada. But better than having to dust it off is to make it a display case where it can be stored, but in plain sight, ready to start burning as soon as it is needed. so let’s start by making a showcase structure with some square section slats.

In the video you have all the manufacturing of this showcase, from beginning to end. And here you have the link to the second part of this post, with more explanations, photos and another video where I make a small review of the manufacture of this small wooden furniture.

How to cut the parts of a display case

Also with the table saw, I am going to cut a 15x15mm rabbet all along the length of all these pieces.

In this way I also get 13x13mm strips that I can use as glazing beads for the glass of the display case (the saw blade is about 2mm thick).

Now, at one end of the 8 pieces of 40cm long and with the help of my small carriage on the table saw, I am going to cut another rabbet. This allows me to close, at the joints of each three pieces, the first rabbet cut lengthwise for the crystals. You can see better how the three pieces of each corner are joined in one of the following photos and in the video.

How to make the tubular joints

Now I can place in position all the pieces of the structure of this showcase and number all the joints. And I also want to draw an arrow on each side so I know where to drill the holes for the dowels. In the 40cm pieces the holes will be in the head of the slats, while in the 30cm pieces they will be in the side. This way I know in which areas I have to drill the holes for the tubulars with the pillar drill.

With the vertical table of the pillar drill and the help of my simple depth stop, I drill a couple of holes in both heads of the 40cm slats.

And with a pair of metal centerers and the help of another frame lath where to drill the holes in the sides of the 30cm laths. Carefully, trying to be precise and following the numbering I drew on the joints, otherwise it will be very difficult to fit the doweled joints of the pieces of this showcase structure.

In one of the ends of the 40cm slats, in the one with the flat head, I drill a third hole to insert another tubing.

Carefully following the numbering mark where to drill the other hole for these third tubing, matching these holes in the small piece that protrudes at the other end of these slats.

The photo shows the holes drilled in the sides of the 30cm pieces that will go vertically in the structure of this display case. And that little drill mark you see is what remains after drilling the hole in the piece that protrudes into the head of the slats. In the video you can see better the whole procedure and the order in which I drilled all these holes to make the joints with wooden dowels.

Assembling the parts of this display case structure

Once all the holes for the tubular joints have been drilled, I can glue this display case structure. For me the most comfortable way is always to use tightening straps, like those from Wolfcraft, to hold everything while the glue dries. But if you look at the photo, I’m only tightening half of the joints. Leaving the structure as it is in the photo, the webbing should be horizontal, to tighten all the joints at the same time.

With 44×22 millimeter strips I make two squares in the shape of a frame with mitered joints at the corners. The side length of these squares is equal to the base dimension of the structure plus 12mm. These squares will be the base and top window of this display case structure and protrude 6mm all the way around the display case.

Follow these links to see all the parts on how to make this display case for the queimada pot:

How to install a hidden lid support hinge

One of the problems with the trunk doors opening upward, and also with my display case with the window at the top, is that the ...

In the wooden display case that you can watch how I made in the previous posts, the door does not need anything to keep it ... 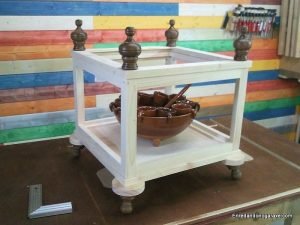 How to make a display case for an earthenware pot, part 3

Once the main parts of the glazed display case are done, I can now assemble the legs and decorations, and finish assembling the whole wood ... 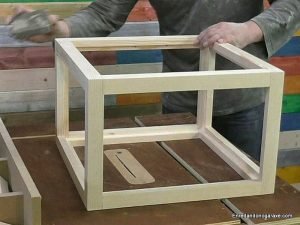 How to make a display case for an earthenware pot, part 2

After having made the structure of the display case, and the square frames for the base and the window, it's time for the task we ...
Últimas entradas