Then, I cut four strips of plywood and I glue them together two by two. And now, holding the two groups of two pieces together with a pair of clamps, I use a Forstner bit to drill the hole for the bearings. I need to make a hole as straight and vertical as possible, so I use the drill press.

So, after screwing one of the pieces to a piece of plywood, now I can install the shaft with bearings that, hopefully, will help to keep this wood sander stable.

After checking that the shaft turns well, and that I can attach the drill horizontally without problems, I install a first plywood disk fixing it with some epoxy resin, some washers and some nuts.

And I cut the piece of threaded rod that protrudes.

Now comes one of the most complicated parts in the making of this homemade disc sander: adjusting the disc. The plywood disk is unlikely to be perfectly vertical to the axis of rotation. Then, I put a simple wooden table in front of the disc (the same one I will use when I use the finished disc sander), and with a chisel or a gouge and a lot of patience I try to make the disc flat and perpendicular to the axis of rotation. And I also adjust the back of the disc.

Once the disc of this homemade wood sander is adjusted, I will glue another thinner disc on the front. This one is used to hide the nut and a washer that protrude in front of the first disc, so I had to make a hole in the shape of the nut and drill a counterbore with the diameter of the washer.

Then, I glue the disc and I clamp it with several clamps while the glue dries. For this it is better to disassemble the shaft with bearings from the support of the homemade drill disc sander. And when the glue is dry I cover the front hole with some wood paste and I sand it flat. And finally I turn the edge to match the two plywood disks.

Now I just have to cut a piece of sandpaper to the same size as the sanding disc and I glue it with stencil adhesive. I use a medium grit sandpaper, as it is the one I use the most for sanding wood. Some of you ask me how to change the sandpaper of this drill powered disc sander, and the truth is that the old sandpaper is very easy to remove, since the stencil adhesive does not leave it stuck as if it were glue. Pulling it out is usually done without any problems. It occurs to me that giving it a little heat might make it come out even easier, but I haven’t tried it (now, after some time using this disc sander I know that in very hot days the stencil adhesive doesn’t work well).

And now I can sand wood or plywood with this disc sander.

After some time using it, I am delighted with this home sander, as it works very well and allows me to be very precise when sanding wood.

Next we can see how to change the sandpaper of the homemade drill powered disc sander. And I also show you the silver YouTube button that I got a few months ago 😀 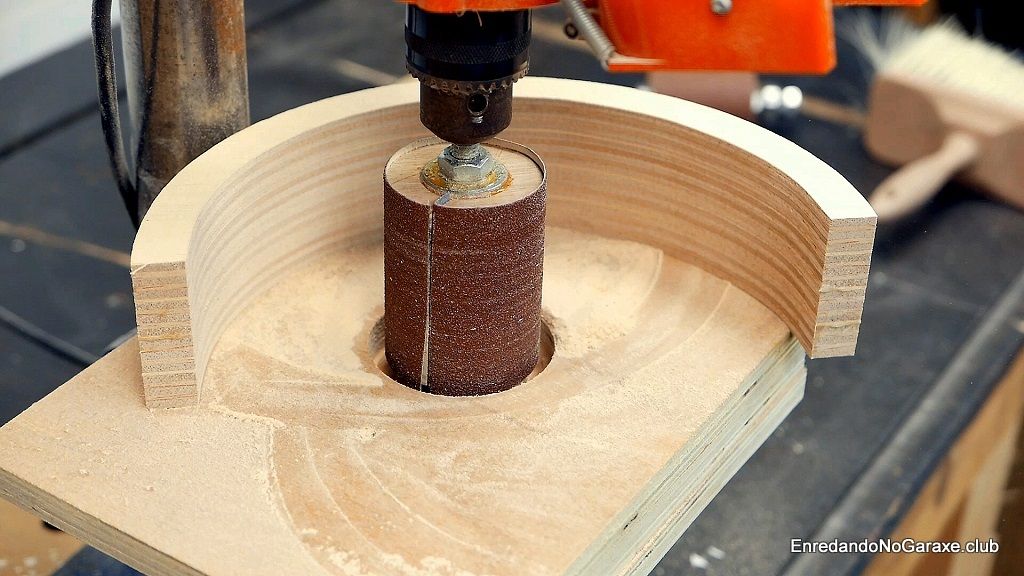