The first time you try to open and empty a light bulb it seems that in any carelessness the bulb is going to break and instead of getting an empty light bulb we are going to find the broom picking up crystals. But the truth is that once the trick is taken they are easier to open than it seems.

All the DIY tools you need are a woodworking saw, needle nose pliers, a flat screwdriver, and a small metal file.

To empty a bulb, some people prefer to break the black glass that they have at the tip of the metal socket, but it is more comfortable for me to cut the socket with the marquetry saw around the black glass. The inner part is usually connected to a wire that is easily cut by twisting it. Then it is a matter of levering the screwdriver to break first the two glass tubes that hold the filament and second the glass flange that is at the junction between the bulb and the metal socket of the bulb. 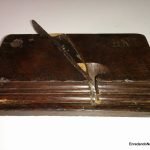 When the bulb is already open we only have to empty it and clean it, but before it is convenient to use the file to file the area of ​​the cut in the socket and also the area where the bulb is attached to the socket, where there may be glass remains. So we can manipulate the light bulb without risk of cutting ourselves to make the crafts with light bulbs that we have seen on the Internet or those that occur to us. It occurred to me to make a mini-bowl with fish, although I confess it was to fill in the video a bit, and even above I was excited by taking photos of it.

Anyway, emptying a light bulb is not complicated, although it is advisable to use leather gloves and protective glasses, lest it break. Another problem is to see what to do with an empty light bulb, although I suppose that if we decide to empty a light bulb it is because we already have some idea in mind.

Sanding and painting the wooden stool

I make an ugly cage for Halloween decoration

I had to repaint the wooden stool