The truth is, I never needed to brush boards that wide, but I have some idea on how I can do it, so I think it might be an interesting practice to try. Before starting I think that leaving the perfect table is going to be impossible, but it can be useful for a project where you don't need a lot of precision when thickening the tables, where basically you just want the tables to be smooth. So in this post we are going to see how to thicken boards wider than the electric toothbrush blades.

To brush and thicken a board wider than the brush blades, I will run the board twice through the homemade thickening machine. The first time with an edge on my tabletop, and the second time with the other edge against the tabletop. And both times with the same face of the board against the blades of the thicknesser. 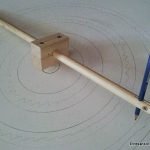 How to make a simple compass beam

After the first pass through the thicknesser I have the jump that was waiting for me all along the wood. I make a pencil mark on the head to know how high the mark was, and make a second pass with the other edge of the table against the tabletop and the same face against the blades. The lateral guide I do not move it, I leave it exactly as it had when making the first pass.

After the second pass I still have some small mark in the area that marked the height at which the blades had reached in the first pass. In addition, I also have a brand of the same style at the height that the carpenter's brush blades reached in this second pass.

I suppose that is what I could expect from this technique and from a homemade thickener, but even so I decided to do a couple of passes again, making sure to keep the board pressed against the lateral guide while brushing.

The result this time wasn't perfect either, even though I was almost able to remove the brush marks. But I think that with a little sanding this board will look quite good.

Although the truth is that the board was about half a millimeter thinner in the center than at the ends. It is not much but it can be a problem in some projects where you need precision. It seems to me that I will have to take a look at the brush and the guide to make sure they are perfect without any deviation.

I use screw joints to make a wooden structure frame