To work as a carpenter, I think it would be too small, but as a carpentry fan, I wanted to have a milling table that would make my job easier and increase the capacity of my little one. carpentry shop.

See all my articles on how to make one> milling table <or homemade router.

Attaching the plunge router machine under a table top is not very difficult: we remove the plastic cover from the base and use it as a template to make the holes in the table top; we look for some long screws with the same diameter as the screws in the cover we just removed; we cut the screws to the size we need; and we make a recess for the screws head on the top of the board. Now I just have to make a hole in the center of the router table top so the router bit can pass through the board, and I screw the plunge router machine under the board (I must be careful with the screws. The first ones I used turned out to be very soft and they broke when tightened, remaining inside the base of the milling machine). The problem is adjusting the height of the router machine, so first of all I wanted to have some router table lift . And the next thing will be to make the router table fence , but that will also be another post.

At first I was going to mount the router on a 1cm thick board like the one I used for the table saw, but since I wanted to make a recess for some inserts adjustable to the burs and I also had to reduce the holes for the screw heads , I would only have a few millimeters of board left between the head of the screws and the base of the router and it would surely end up breaking the board under the head of the screws. I ended up using 16mm plywood that I bought by pre-cut pieces (I didn't want to pay for a whole board that was very expensive and I found it pre-cut to a size that fits my table well). To keep the table level, I had to remove the white board from the table saw area and put another 16mm plywood board in place. 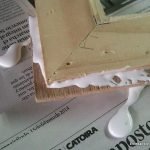 I made the recess for the inserts freehand. It seems complicated to do if you do not have practice, but cutting the entire contour with a cutter first and approaching the cut little by little we will see how the wood jumps, thus avoiding overdoing it. After a few touches of chisel and sandpaper to adjust the insert and that's it.

Those of you who have attached a router of this type under the table will know that another problem with a homemade milling table is that the bur holder does not reach the height of the table. And if the bur to be used does not have a long enough handle, we may find that we cannot bring it to the desired height. After some tests it turns out that some of my strawberries are very tight, so I am going to attach a extension mandrel milling cutter that will also facilitate the change of strawberry. As soon as they send it to me, I'll show it to you.

How to make a workbench frame

I use the wooden hoop to make a choker

My mistake when cutting dovetail joint