In this post, with its corresponding video, we see how I made a homemade table saw with a disc saw, or circular saw, attached to the bottom of a plywood board.

I no longer know how many times I said that I did not like the invention of the miter saw arm as table saw, which gave me a lot of problems. The cutting disc was not kept vertical, but tilted back and forth as it rotated. After trying everything, my impression is that the shaft may be a little twisted and against that there is nothing I can do.

A few days ago (maybe a little more) I bought a new 1200W Ryobi circular saw. And I will use it to make my table saw instead of with the miter saw arm. 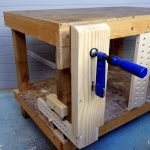 But, the thing is that when I was back home I realized that it doesn't have a riving knife, like the little Bosh circular saw that I also have, so I'm thinking of some system to put one riving knife on the table saw. But in the meantime I will install this in a similar way as when I made my first table saw (this one) with the Bosh circular saw.

As you will see in the video, the installation is simple and the only problem is to adjust it so that the disk is parallel to the lateral guide that we may already have installed. Since the saw is held in place with self-locking nuts and bolts, one option is to fit one of the screws and pivot the saw until it is perfectly parallel. I suppose that if your tabletop is large, this can be a bit complicated, but I have the advantage that the tabletop of my table saw is made with small, very manageable and easy-to-remove boards.

Did I say the only problem? It turns out that because this circular saw has more power, it also has a bigger electric motor. The circular saw itself is attached to its base by means of small pieces of metallic sheet where it articulates, to allow it to be tilted, and also to change the depth of cut. If you look at them, these small pieces of sheet do not look like a big deal, and in fact they are not totally rigid, and even they twist with the lateral efforts that are applied to the circular saw. The result is that the cutting disc does not stay perfectly vertical.

Luckily, when I install the table saw disc lift system, it holds the electric motor keeping the cutting disc vertical.

I suppose these saws are not designed to be used upside down, since in that position the weight of the motor itself twists the metallic sheets enough so that the cutting disc deviates slightly from the vertical. And that occurs even though I have turned the tilt adjusting screw until the metallic sheet touches the circular saw base.

Likewise, if I file the plate to be able to tilt the saw a little more, I can compensate for the mismatch due to the weight of the motor. Another possibility would be to fasten the motor with some type of flange or with some wooden structure, but that would eliminate the possibility of regulating the cutting height of the blade, so it will be my last option.

I think that a lift system , in addition to allowing me to adjust the depth of cut, will help to hold the weight of the electric motor. At the moment I think of two possibilities: one is using the same lift that I had made when I made the table saw with the miter saw arm, but that will not allow me to tilt the blade; and the other possibility is an idea that works with cables that I think would allow me to cut at XNUMXº, although the truth is that so far I never needed this type of cuts.

But, well, if you follow my YouTube channel, sure you already know that in the end I used the table saw blade lifting system that I had made for the miter saw arm. And with that lifting system I CAN'T tilt the disc to 45 degrees or to any other angle. But hey, I made a table saw sled that allows me to make some of those 45 degrees cuts with enough precision. You can watch how it works and how I make this XNUMX degrees cross cuts table saw sled in the following video.

Installing tongue and groove wooden frieze in my shop