With how well everything was working on this home table jigsaw, I decided to try to make a guide for 45º cuts to make miter joints. With this saw it seemed difficult to get perfect cuts at 45 degrees, but that the cuts came out as deviant as they came out caught my attention and made me think that it was not a problem with the guide car, but rather it could be a problem with the saw itself.

The base of the car of this table jigsaw It is the same as the one I made for the guide for cuts at 90º, the only thing that changes now is the support strip that goes on top, which has to form a 45 degree angle with the cutting direction of the blade. Being very precise when putting it in place is not easy, so instead of a slat I put a right triangle of plywood, so that the corner of the perfectly right angle was facing the cutting blade. 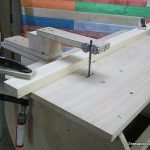 Straight and rip cuts in wood with the jigsaw table

So far the whole theory seems simple, but as I said at the beginning I found that the angle that it had with the union of the two cut pieces was very deviated from 90º, which led me to think that there was something wrong, probably in the saw. I tried again with the square cut carriage that I made a few days before and that was working perfectly and now also had a slight deviation.

Looking for what could be wrong, I noticed that the cutting blade does not fit very tightly into the anchoring system of the jigsaw, and it is easy to turn the front of the blade to one side and the other, thus it ruins the work of aligning the sheet that he had done. As seen in the photo on the left, I have another saw jigsaw with another system of anchorage of the blade that seems more reliable, since after handling it for a while I find it much more difficult to turn the blade to the sides. I think I will mount this on the board and see if it works better. But the best option is to make a guide to miter cuts with the table saw.

As I am told in the comments of the video on YouTube, this problem of the blade rotation is quite common in some DIY jigsaw, so they recommend buying a higher quality one. In spite of everything, even if the jigsaw has this problem, I think that having the saw mounted with the guide for vertical cuts at 90 degrees it can be very useful, since cutting freehand without the guides the cuts come out quite well. Perhaps they are a little slower to carry out, since the cut must be compensated continuously, but with the help of a disc sander and some simple guides to sand at 90º and 45º we can obtain a perfect result. And even if you don't have a disc sander, with a high-quality cutting blade, and light sanding to remove wood burrs, the cuts are good enough for many home projects.

How to make a small wall display cabinet

How to make mortise and tenon router jigs

Make a small wooden board from old planks