Seeing how simple it seems that it was to make the table jigsaw and its guides to obtain precise cuts already squad, I thought I had to write this article with some considerations on the manufacture and adjustment of the jigsaw table and on its use. And on the guide to cut at 90 degrees.

The first thing to keep in mind I would say is the power of our keyhole saw. The one I used is a 600W Black and Decker. There are saws of this type very cheap but they do not usually have a power of more than 350W and that I think would be very fair in power.

They would surely work well enough with a cutting blade like the one I showed in the first video where I attached the saw to the dash, but the long blade I use in conjunction with the bearings cuts a thicker groove (it's made with a thicker sheet metal and the teeth they have alternate setting), removing more material, so you need more power to cut without "choking." 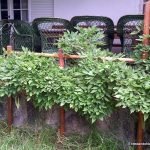 See how to attach a jigsaw to a board to use as a tabletop jigsaw.

Also, it may seem obvious, but sometimes we forget to check something as basic as it is that the cutting blade and the skid of the jigsaw are perfectly at 90º. Some saws like the one I used have a notch that makes it easy to put the skate in the correct position at all times, but others may have to carefully probe the position with the help of the square. Although it does not hurt to check the position of the skate, since if we are a bit rough (I'm not saying that I am: p) it is possible that with the use or by some blow we have bent the metal of the skate and we need to correct it.

When assembling the jigsaw on the board, I didn't stop long enough to check that I was placing the saw perfectly parallel with the sides of the board, so the cutting direction of the blade was slightly skewed. I'm not sure if this has a lot to do with using the carriage for square cuts, but I think that since the blade is tilted with respect to the direction of the cut marked by the carriage, the back of the blade can be pushed into a side of the wood that we are cutting, and if we do not hold it well, it will gradually move the wood towards that side and divert the cut. So to correct the position of the saw I decided to cut with a chisel one of the plates in which the skate fits. And after filing the sheet, I was able to leave the sheet as parallel as possible to the sides of the board.

Before adjusting the jigsaw's skid position when making 90 degree cuts these had a very small deviation (2015: The cuts with the squaring carriage come out crooked again after a while. In the end I have to say that it is better to make the cuts at 90 degrees freehand, since freehand cutting with this table jigsaw leaves fairly good).

And speaking of clean cuts, we must take into account the cutting speed that the saw marks us. If we want a very clean cut, we only have to advance the cut slowly without rushing the saw (I never had burns in the wood from cutting slowly, which can happen with the disc saw and the milling machine), but if the saw has enough power for the wood we want to cut we can cut much faster, although the quality of the cut is much worse.

Do not miss the video to see, in addition to all these things to take into account that I have just commented, a couple of more details about the squaring car to cut at 90 degrees and the on and off of the saw.

Make out of the box DIY workbench vise

I make a finger joint with hand tools. Part 2

I adjust the groove to fit the wooden boards