The truth is that the first thing I made to make this lamp were the two halves of the lampshade. As you may know, silicone products, such as small bowls and brushes, are sold for gluing woodworking and DIY projects, since the carpenter’s glue does not stick to them once it is dry.

Don’t miss the video summary in English on “How to make a led lamp in the shape of a tree“. With links to all articles on this making.

So I thought that with a silicone mold in the shape of a Christmas tree I could make the lampshade for this led lamp.

Now it is left to dry for a few days (yes, the mix of layers of toilet paper and carpenter’s glue needs a lot of time to dry), best near the stove, and in the meanwhile we can work on the wooden tree shaped pieces. Because it has so much glue and the silicone area that does not allow the glue to dry quickly, the half lamp shade needs a long time to dry. And when it is dry I still have to make the other half of the lampshade (because I only have one silicone mold). Well, it didn’t pass enough time to dry, so when I remove the half lampshade from the mold the texture of the area that was against the silicone is not very nice. Then I decided to cover it with another layer of paper and glue. Fortunately this layer dries in a day or two and I can paint it and cut off the excess of paper, but leaving all the horizontal border around it.

As we saw in the first part of this making, I added a couple of wood pieces to give thickness to the trunk of the tree. So now I can drill a 30 millimeters in diameter hole along the trunk. Through that hole I will put later the lamp holder and the led bulb of maximum 1 Watt. I couldn’t figure out a way to drill this hole in the drill press, so I made it by hand with the tree shaped piece securely clamped in the workbench vise. I only had to drill in two stages drilling first a smaller diameter hole. And then I finish it with the 30mm Forstner bit.

Then to give a little shape to that trunk I used a coarse rasp file, a chisel and sandpaper to round the corners and carve a smooth transition to the top of the tree shaped piece. The coarse rasp file leaves very deep marks, so care must be taken not to touch the wood outside the wood surface being carved. And a very coarse sandpaper is necessary to remove the marks left, and then a medium grit sandpaper to remove the marks from the coarse sandpaper. Before painting, a fine sandpaper is used to remove all the marks of the coarser sandpapers, otherwise they will stand out too much when applying the varnish stain.

The part that seemed the most complicated to me is cutting the tree in two with the handsaw, but luckily the cut came out much better than expected.

In the video that you can watch in this article I just show how I cut it, since I will make a video where I show the whole cutting process. You can watch that video at the end of this post.

And once cut, I milled a rabbet on the inside of each half to fit the edge that I left on each of the halves of the lampshade. On the homemade router table, using a slot cutter router bit with bearing and the help of one of the wood pushers, making that rabbet is a fairly simple task.

I sanded the milling a bit and tried dry mounting the paper lampshade between the two halves of wood by pressing them together with the clamps. I didn’t encounter any problems and I was relieved to know that gluing the parts would be easy.

Here’s how to cut the Christmas tree wooden shape into two halves. 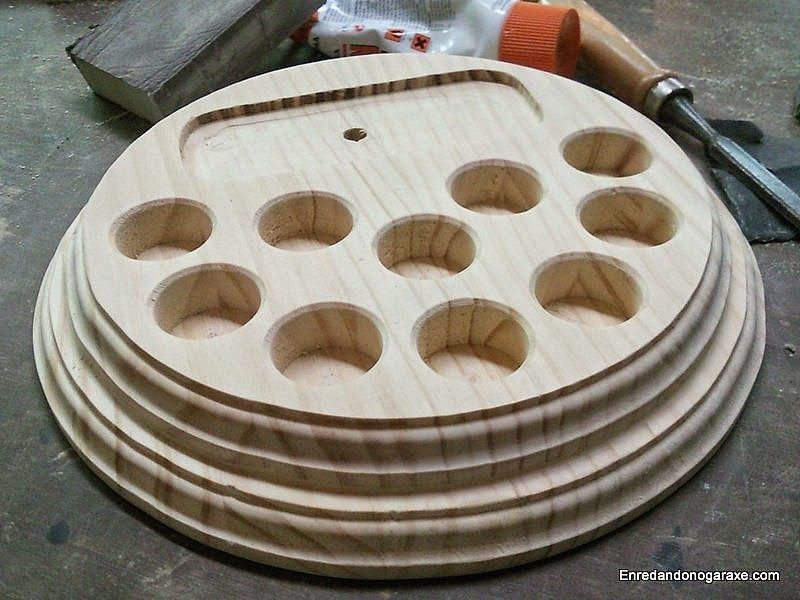