The Jigsaw is one of the most versatile tools for our woodworking and DIY projects, and also helps the wide variety of cutter blades that are affordable and easy to fit and remove from the jigsaw. But sometimes we would like it to make cleaner cuts in wood.

So let's see a simple trick to make cleaner cuts in wood with the jigsaw. It is not a panacea, but it can help. 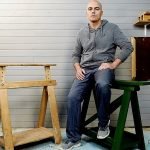 How to reinforce a wooden sawhorse

This trick of carpentry and DIY is very simple, and consists simply of putting a wooden base under the metal base of the jigsaw. And in that wooden base I previously cut a groove with the same cutting blade.

So now I'm going to cut the wood directly as I normally would with the jigsaw. This wooden "insert" that I put under the metal base, holds the wood while the teeth of the cutting blade protrude upwards, reducing chipping.

Nor am I going to say that a spectacular result is obtained, but I think that in view of the two cuts the difference is clear, and although the splintering of the wood is not totally avoided, it is significantly reduced. In view of the image, I do not even have to say in which I used this trick to cut wood with the jigsaw and in which not.

Now that this jigsaw clean cut hack is just a temporary thing that I wanted to test if it worked or not. This is why I used double-sided tape to attach the wood veneer to the metal base. But that joint with double-sided tape doesn't take many cuts.

In future entries, or in videos that you can already find in my carpentry and DIY channelYou can see improvements that I have already made to this trick by incorporating systems to keep the cutting blade vertical and thus achieve a perfect vertical cut.

Some considerations about the jigsaw table