Surely, looking for how to brush wood, you have already seen in a carpentry blog or in a YouTube video that it is possible to brush the edges of the wood using the milling table with a straight bur. Brushing with the milling machine is not a technique that I will use often, since I have my brush homemade thickening machineBut I wanted to see if it was as simple as it seemed.

Until now I had not tried brushing with the milling table because with my lateral guide as it was, I couldn't try this technique. But since I fitted another guide in two to my guide box, I can already perform this carpentry trick. 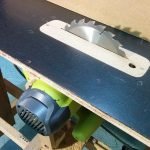 What you are looking for with this carpentry trick when separating one of the guides and leaving the other fixed is to mount a configuration similar to that of the carpenter's brushes. If we move the guide box laterally until the guide we wedge is perfectly aligned with the edge of the cutter, this guide we wedge acts as the fixed base we have in the carpenter's brushes after the cutting blades, while the part without shoe that is before the blades is slightly displaced inwards a distance equal to the amount of wood that we are going to remove during brushing.

Brush on the milling table, trial and error:

As is usually the case with these homemade machines, and even sometimes with purchased ones, the theory seems very simple, but when planing wood, unexpected problems can appear. In my case, after doing several test brushings that did not work well, I discovered that the two parts of the guide did not perfectly parallel. The result of this is that the plank of wood to be brushed does not stay glued to both parts of the guide, and as it is seen in the following video, as it moves along the inclined part it separates from the cutter. It even separates enough that the burr stops brushing the wood.

This lack of parallelism is surely due to some small deformation in the guide box due to the humidity in my workshop. It does not seem like something that is going to give me problems during the normal use of the milling machine, but it does have a lot of influence when carrying out this trick of brushing with the milling machine. And although it may seem easy to solve, I needed to modify the shims behind the guide a few times before getting it parallel with the other part.

Once both parts are parallel, and with the brushing configuration ready, it is easy to brush the edges of the wood with the milling machine and leave them perfect, straight, at 90º with the other sides of the slats and perfectly smooth. Although to make them perfectly smooth, it is advisable to check, before brushing, the direction of the grain at the entrance to the cutter. Ideally, the veins should point outward, as seen in the pencil marks on the photo. If they enter pointing towards the strawberry (it can be seen better in the video), when the strawberry cuts the fibers it will lift them, leaving a sandpaper surface instead of the smooth surface we are looking for.

How to reinforce a wooden sawhorse