Making 45° or mitered cuts and joints doesn’t seem too difficult, after all, what can go wrong? Well, practically everything. You have to be very precise with your measurements and cuts to make a decent joint.

The first thing to keep in mind is that the strips to be joined must have the same thickness and width. For this, it is not enough to buy them in the same sizes or in the same store. Sometimes it doesn’t even work if they are pieces that we cut from a longer ribbon. It is best to cut the pieces two or three centimeters longer than we need and check that they have the same thickness and width. This will not really affect the joint itself, but eventually we will see that at the inside corner of the joint one of the slats is protruding and/or that some of the faces of the slats are not flush with the face of the other side of the joint. I’m sure you already know that this will mean a lot of time sanding to match, so the best thing to do in those cases is to match the four pieces with our thicknesser beforehand. I don’t one, so I made myself a homemade thicknesser.

The second thing is to make the cuts as perfect at 45º as we can. One option is to use a miter saw, which we will have to have with its cutting angles very well adjusted. Another option is to make a guide or template for miter cuts with the circular saw, which is precisely the subject of this entry.

To make the miter crosscut jig, the first thing we need to make is a 90º cutting fence (which you can also see how to make a 90º crosscut jig), which we will modify to cut at 45º. Two things are important in that jig for 90º cuts: that the vertical cut be as close to 90º as possible and that the cut through the slats also be as close to 90º as possible. Now we will modify it as shown in the video, for which it is very important to have as perfect a square as possible. The most reliable and cheapest thing I could find was one of those green Faber-Castell draftsman’s squares. It will come in handy in the workshop as it is more accurate than my carpenter’s square and the other clear plastic square I have.

And the third thing, which we sometimes do not take into account and which results in the fact that even with the most perfect cuts at 45º the joints do not fit well. If we want to make a frame, square or rectangular, it is not enough that the cuts are at 45º, but also the opposite sides must be exactly the same length. No matter how accurate the meter we use, how sharp our pencil is and how good our eyesight is, getting equal pieces will take a lot of time and practice. The best option is to measure one, place it in the cutting position and adjust a stop, as shown in the video, so that when we cut the other piece it will be exactly the same as the first one.

Be aware that this guide can be dangerous, and I sometimes do not use it in the best way. See this post about the kickback, the problem of kickback with the disc saw.

(July 4, 2013: Here’s a tip: Making a miter joint can be a lot more complicated than it may seem. This guide works as well as you can make it. The theory is very simple, but every small error is multiplied by four. Miter joints that don’t fit perfectly get on our nerves, my first one. The thing is that if this is a hobby for you, as it is for me, maybe you should think,…. well, it’s good enough for me, I’ll improve them. Sometimes it’s better to be a conformist than to give up one of our woodworking projects. And if you are a professional carpenter? well, you know that mastery requires knowledge and a lot of practice).

Gluing and fastening the joint can also be complicated. Until we make something for it, I’m going to use some Wolfcraft ratchet straps. They are very useful, sometimes more comfortable to use than the clamps and are useful for other tasks where you need to hold something, for example if you are carrying something big in the car and need to hold it tightly.

And it remains for me to say why I didn’t put just one ribbon in the template to cut at 45º. We could actually cut one side, rotate the ribbon (the side that was facing up now put it down) and now put the other side in the cut area. The problem is that sometimes we will cut some molding and it will only have one smooth side to rest on the base board, so it is not possible to turn it and rest the molding area against the board. That is why I think it is better to have the possibility of making the two cuts with the same face of the slat resting on the base board and for that we need the two slats. Although working with the wood on this side of the guide may be more dangerous than putting the wood on the other side. 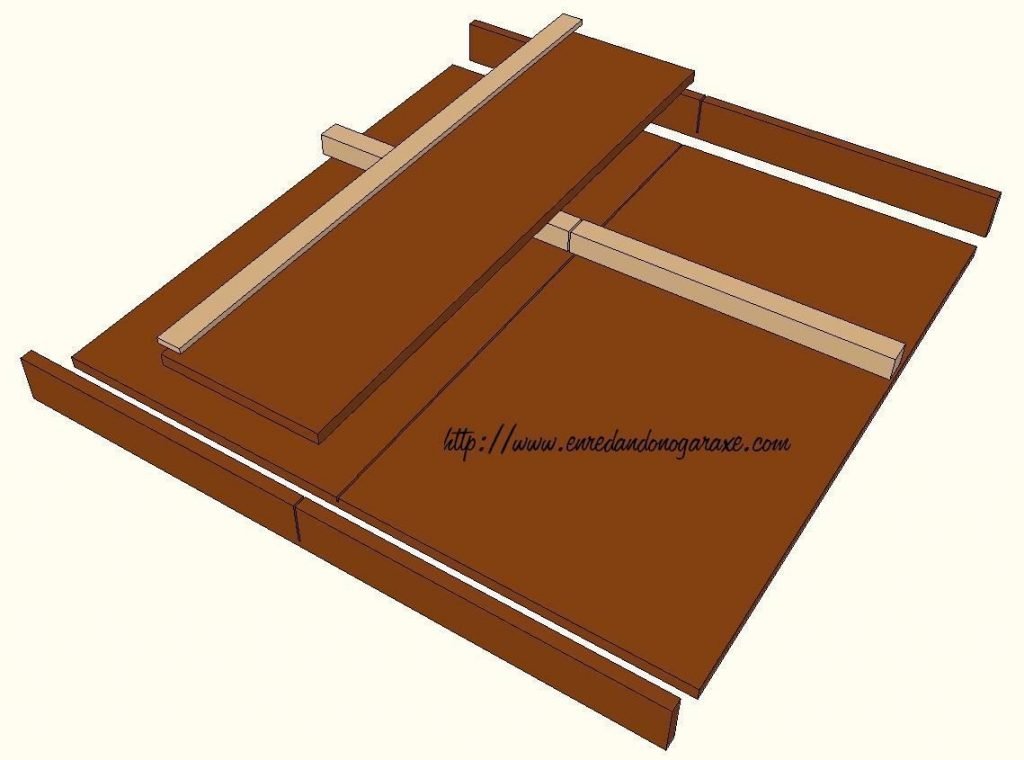 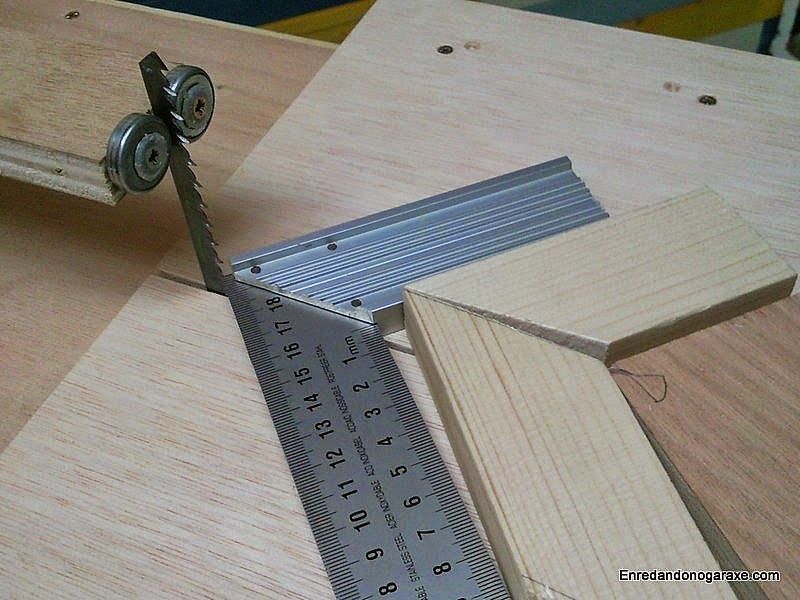