We continue with the multifunction homemade table that Félix Gómez Martín made. We saw earlier how he made the aluminum guides And now we are going to see how the table is made and how the milling machine, the disc saw and the jigsaw are attached together under the table.

“My goal with the table is that by living in a flat and having little space it could be removable and be able to transport it to a garage or any other place where I need it. I chose 1 cm plywood boards because it is resistant to twisting and light in weight. Therefore, what I did was glue two 1 cm boards, leaving the machine bed lowered to 1 cm and in this way not losing too much cutting or milling height. In turn, the table is reinforced at the bottom with pine slats. I have tried it by dropping my weight lying on it and it has resisted (I weigh about 90 kg). »

«After thinking about the legs a lot (remember that it must have been removable) the best and cheapest option I saw was to mount it on some cheap pine trestles. In one of the photos you can see how the table is fixed to the trestles. I put a mortise nut in the studs that the table has in the corners and then I drilled the trestle from the top. With pieces of abbebay (sapelli) wood that I had saved from a broomstick, I cut them and inserted a long screw that had previously cut the head so that once embedded in the stick they could be screwed to the table by hand in the 4 corners, thus leaving the table fixed to the trestles. » 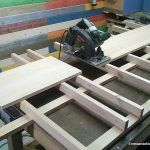 “As for being able to move the height of the machines, as the table is not very high and I have plenty of space to put my hand in, it is not at all uncomfortable to handle the height of the circular saw which in my case is a 1500W Black and Decker and as for the milling machine I have, the 1400W Ryobi (like mine) has a rod that makes it quite comfortable to handle it in height with your hand under the table.

«
«The guide that runs perpendicular I chose to make it with an aluminum profile since I wanted maximum precision and the wooden slats all end up twisting. As it still has a bit of slack, I decided to put two meters embedded in the table and put two small C-clamping jacks on each end, held with rivets, both to the rule and to the "u" profile, with what I get perfect cuts by squeezing both jacks with both meters. Under the table where the jacks run, I put flat aluminum profiles, since although the board is resistant to torsion, it is not so resistant to blows or pressures from the jacks and if the profiles had not been placed, the table would have ended up dust. underneath so much tightening and loosening. »

«As for the ruler that goes with the protractor, this one was made of wood so that it could also be used with the milling machine (it could not be made of aluminum) but to avoid twisting as much as possible, it is also varnished and has a flat aluminum profile screwed on top. Apart from having the protractor as a «miter», it also has, as seen in the photo, another table, this one made of beech, screwed with rails and brackets to be able to lengthen it both to one side and to the other to be able to carry out milling. "

«The attachment of the machines is very fast, I just have to fit and as you can see in the photos, take the metal plates that I have (they were from the trunk of the motorcycle) and fit them into the screws that are embedded in the table with studs and tighten them with wingtips. I do not modify the machines at all and the assembly and disassembly is quite fast and they fit firmly to the table. "

«The machines do not want to leave them fixed because then it would lose the function of being removable, and as for the adjustment, it is solved because mainly the circular fit perfectly on the bed without any play. That adjustment cost me to get it based on, after making the bench, adding small wooden wedges (flat toothpicks) glued until I get the perfect fit. Therefore, the saw is removed and I put it in less than 1 minute, always being completely adjusted. »

"For all machines the rules are the same. As for the jigsaw, it is the least convincing to me. If you cut with the rules, obviously the cut with the jigsaw It works well, but the drawbacks that I have seen and that on the other hand I think they have almost all the comments that I have read about it are that the saw pushes up the piece to count and you have to keep an eye and the second negative point that I have seen is that if I put the revolutions to the maximum it vibrates a lot. At this point I have to say that to get you out of a hurry it is worth but that his would be a bandsaw. »

“It does not dance or move at all since the board is bolted to the trestles. The profile runs well. Slacks have a little but more than the profile itself, the grip between the vertical aluminum ruler and the guide, but having two jacks, one on each end, does not affect when cutting because it is fully fixed. »

«The switch that I put on it has 2 sockets, one that always has power in case I have to connect a drill or something similar and the other that goes through the cut-off tap to be able to turn the machines on and off from the table. Also, since it will be stored standing up, I have put on one of the edges the plastic legs that are usually put on chairs on the legs so that the wood does not have contact with the ground. And finally, in order not to have the machine cable hanging, I put open eyebolts to collect the cable. »

As I always say, this type of switch can be accidentally turned on. Try to get yourself a security one.

«The entire table has about 10 coats of polyurethane water-based varnish to make the surface scratch resistant and in turn prevent moisture and twisting from penetrating. Plywood boards suck varnish that is pleasing. »

«At first I made it 51cm x 80 cm, but then I realized that if I wanted to cut boards with a width greater than 42 cm, which is what I had from the disc to the top where the ruler gave, I was going to be ineffective. After seeing all the furniture that I had in the house, the narrowest was 50 cm, so I decided to lengthen it by 30 cm more, (as seen in the first photo has an addition), an addition that I put with the filling system and reinforcing with a ribbon underneath, which now has a width of 110 cm and the possibility of cutting boards of up to 74 cm, which already gives me practically any normal furniture job. »

Turning wood for the first time