After making a wooden ring to test the operation of the guide to cut circlesI was sorry to do nothing with it, so I thought that making a wooden choker would be a curious project to do in this blog of carpentry for fans. And the best thing is that the most difficult thing, making the hoop, was already done.

If you saw how I did the wooden hoopYou already know that he had a small imperfection in the beginning and end of the cut after cutting the inner circle.

So to touch up the inside of the wooden ring, first with a chisel I cut the part that was protruding, and then with a fine file I finished leaving the smooth area. A sanding all over the surface of the hoop and I can start making the wooden necklace. 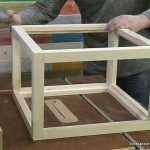 I make a display cabinet for Galician queimada pot, part 2

If I leave the edges straight, it would make for a very uncomfortable choker, but with the router table and ball-bearing cutter shown in the picture, it's easy to round the edges of the wood hoop. To mill the outside of the ring I turn it counterclockwise, while to mill the inside I turn it clockwise. I have to mill it little by little, without pressing the bur too much or trying to go too fast, or the bur will grab the wood and throw the ring out of my hands. A bit of sandpaper and you're ready to continue working on it.

For someone to put this ring around the neck I have to cut it into two equal halves and put some kind of hinge and a clasp. With the help of a square and a ruler I mark a couple of lines that divide the hoop into two exactly equal parts, and with a marquetry saw I am going to cut it carefully.

The cuts do not come out perfect, and are probably not exactly on the same plane, but if with the help of the square I put a perfectly vertical piece of table on a sandpaper, I can use the guide table to rectify the cuts, and leave them smooth and in the same plane at 90 degrees with the semicircle of the middle of the ring.

Now I need to drill a few holes centered in the cuts I just made, to put the mortise hinge that allows the choker to open, and to put the magnet to keep it closed. For this I have to make a guide that allows me to correctly drill the ring halves in the column drill.

This guide should keep half of the ring to be drilled perfectly vertical, and with the surfaces on which I want to drill perfectly horizontal and at 90 degrees with the bit that I will use in the drill press. Explaining step by step how I made this drill guide would make this entry too long, but in the video I think it looks pretty good how to make the drill guide.

With the first half of the hoop drilled, now I have to drill the other half so that both parts are as well aligned as possible. The problem is marking the exact points to drill. After drilling I realized that I did not have centering devices the diameter of the bit I had used, and the best I could think of was to improvise a centering device with a piece of nylon dowel and a screw. I put the plug in the hole and with both halves on the table and the other end of the rings together and against the square, I close the ring until I mark the point to drill with the screw. And I do the same for the other drill that I need to perform. I must not forget to make a pencil mark to know where to drill the hole for the hinge and where the hole for the magnet. And with the help of the drill guide, I drill the holes in the column drill.

I can now sand the ring and apply a coat of varnish stain. I let it dry, sand it gently with a very fine sandpaper, and apply a second coat of varnish stain. The result was quite decent, but using a spray or a gun the paint job would be perfect. With the dry varnish stain I can put the mortise hinge in the corresponding holes. And I'm also going to put the magnets in their holes by gluing them with epoxy. As soon as the resin is dry I can already see if the wooden choker opens well and if it is easy to put around the neck.

How to install the cabinet crown moulding